This morning was mostly cloudy and still, at one point the cloud broke and it became warm for around 20 minutes, before clouding over again, bringing rain by 15:00hrs.

There was very little change noted today, another look for the possible arrival of the Spotted Flycatchers wasn't fruitful, but I still hope one may turn up. I spent quite some time in the Scrubby Woods, listening and watching, hoping for a Garden Warbler or Turtle Dove, but only the regulars of BLACKCAP, CHIFFCHAFF, SONGTHRUSH, GREAT TIT, DUNNOCK, WREN, GOLDCREST, STOCK DOVE and BLACKBIRD were heard to sing, I also had views of BULLFINCH, JAY, GREATER SPOTTED WOODPECKER, TREECREEPER and LONG TAILED TIT, plus, at last, I added a new species to this seasons 'successfully bred'' list, when a recently fledged ROBIN was seen, the 3rd additon for this season. Last year I had recorded 10 species as having successfully bred by this date!

Whilst I sat and listened I was fortunate enough to hear the first CUCKOO (58) of the month call several times as it flew over, I also saw the 3 raptor species of KESTREL, SPARROWHAWK and BUZZARD up hunting.

A pair of Orange Tip Butterflies were seen, the male alighting briefly for me to get my only photo's of the day. 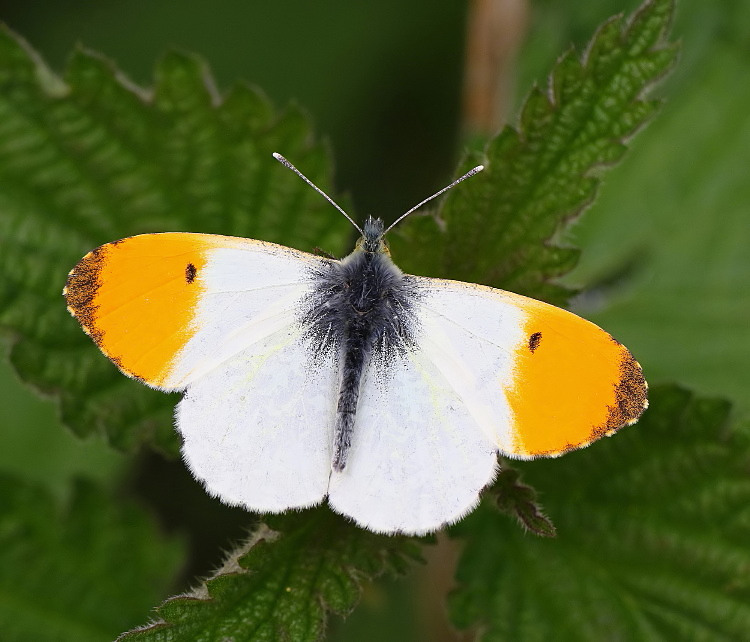 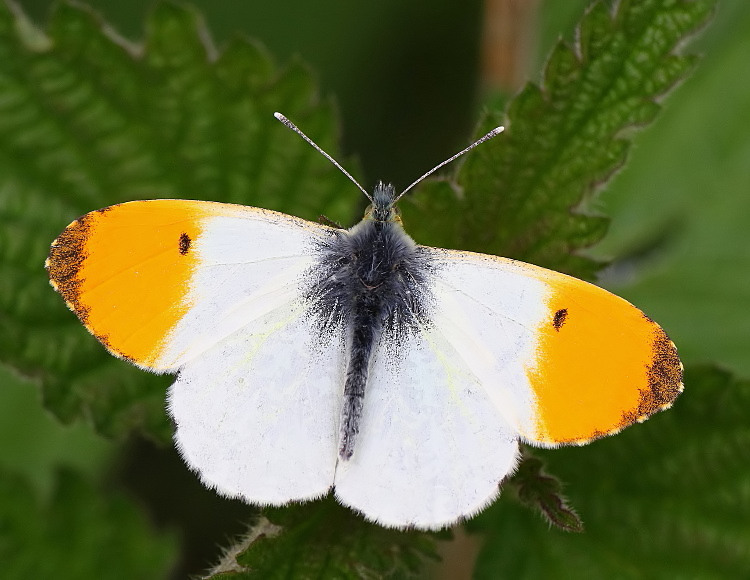 Another Buzzard was seen on the fence line at the Ashes Lane Field, where 9 CANADA GEESE were grazing. A late circuit of Migrant Alley was very quiet, just LINNETS were spied along the fence lines and posts today, with a dozen or so SWALLOWS feeding low over the sheep pasture. The Little Owl wasn't home today, but a WHITETHROAT had turned up in the Greenhouse Copse and was singing along with Blackcap and Chiffchaff there, the Greenhouse Grounds had another 2 Whitethroats singing.

Early this afternoon I had another walk over to the Scrubby Woods, mainly to try and find some Odonata, but within an hour it had started to rain, however, the effort didn't go unrewarded, as  the first TURTLE DOVE (92,59) was at last heard to sing, I eventually tracked it down to an Oak tree, where I watched it ''purring'' for a few minuted before it flew off. Its arrival, although much earlier than last year, (22nd), is way behind the 14 year median average arrival date, which is the 24th April. Another case of the scarceness of the species causing them to be recorded less and less on my patch, pushing the first date ever later  :-(
Posted by Warren Baker at 16:11

I've been waiting and watching to see if one arrived for you! Great news. Wish one would come to perfect habitat in Sutton Park Sutton Coldfield but unlikely!

Warren....It's highly unlikely I'll ever see a Turtle Dove anywhere near our area and beyond, they just don't make it here.

And to think the Maltese bastards have a permit renewal to continue shooting these beauties on spring migration.

Have a good weekend Warren.

Pj1973,
You never know mate, especially in the Autumn!

''Maltese Bastards'' I like the sound of that Pete :-) A bit more polite than what I refer to them as though ;-)